I’d been hearing Ales Kot‘s name mentioned a lot over the last year, but hadn’t had a chance to check in on his writings until very recently, when I picked up the first two issues of his new Image book, ZERO– and boy, did it catch me off guard. In a very good way.

I was so impressed by the first two issues that I reached out to Mr. Kot in the hopes he’d be willing to pop a script our way, which I’m thrilled to say, he was happy to oblige!

Now, I wouldn’t say issue 1 is required reading before checking out issue 2 (script or the actual comic), but if you do head out to pick them up, I would recommend reading 1 & 2 back to back (along with the recently released issue 3)– That said, this script can read as a stand-alone, so feel free to dive into it. 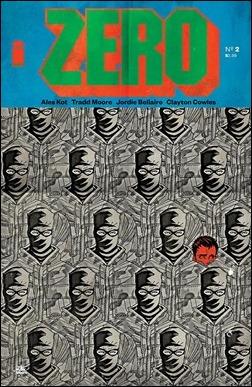 One of the things I love so much about the Archive is that we get a chance to see how comic writers write. I mean, sure, we can extrapolate a lot from dialogue balloons and caps, but it’s always pleasant to peek behind the curtain and see the words that shaped the art. And with Mr. Kot’s ZERO script, I found some very nice writing…

Take the introduction of MINA, on page 2:

Mina, 8 years old. Red hair above her shoulders, a simple and precise haircut she gets every three weeks. She’s a beautiful child and you can sense that she will grow up to be a beautiful woman. There’s a mix of maturity and intelligence beyond her years embedded within her face – it’s the eyes – yet the overall shape of it suggests wild brilliance and happiness of childhood that is somehow yet unbroken.

The words that come out of her mouth suggest that this might be an illusion. Nothing else does.

I love the prose-ness of this description. It really could be taken from a novel, and that’s rare to see in a comic script. But, beyond that, it’s a great passage for an artist. There are visual cues: Red hair/Precise cut/shape of eyes– but more so, there are the other intangible cues: Wild brilliance/illusion of a happy childhood, and that’s the stuff that gives an artist ammunition to create something memorable.

He’s smiling. He looks much younger here. His eyes look like the eyes of a child. There’s enthusiasm in him that is entirely gone in the last panel on previous page. He’s looking at us like a child looks at their parents when it wants to be recognized because it knows it achieved something extraordinary.

We get the physical action of what is happening in the panel in the first paragraph, but also and emotional one in the last sentence. And let’s face it, everyone knows what that look is.

What I took away from Ales’ script is to remember that scripts don’t necessarily need to constantly direct. That there are times when you’ll make a more powerful statement, or unlock more creatively, if you simply imply.
As a sidenote: if/when Ales decides to write a novel, I’ll have my iBooks open and ready for it.

From a mechanical standpoint, Kot’s script style is pretty minimal, which I like. While he does CAP his dialogue, there’s no indenting or centering. Still, it reads perfectly fine.

I did note with interest that at some point early in the script, he drops panel numbers. I’m not sure if this was a formatting error in the PDF, or if he eschewed numbers, instead opting for an overall page document, allowing artist, Tradd Moore, to dictate the panel count.
That said, Page 13 is a 16-panel grid, which Ales does count off. I don’t have the issue on hand, but I’d love to compare/contrast that to the final page!

A big thanks to Mr. Ales Kot for providing his script to us!
You can follow Ales on Twitter @ales_kot
And he regularly posts on Tumblr: aleskot.tumblr.com