One of the things I’d really like to start exploring on the Archive Blog this year is pitching and publishing. Part of that is a reaction to what I see of the various message boards, namely that a lot of aspiring comic writers and artist have a “Image or Bust” attitude.

Look, I like Image. I love their books and creators. But they are just one publisher, and they’ve got a ton of projects from established creators. Plus, from what I understand, Image is an office of about ten people. So, when I hear complaints like: “I pitched to Image and never heard back from them” it doesn’t surprise me– particularly considering the number of submissions I can surmise they get…like, daily.

Now, I did say they’ve got projects from ESTABLISHED creators. The question you should be asking yourself is, How do I get established?

One route I see is building up an audience via a smaller publisher; And there are a ton of them out there. One of which is SLG (Slave Labor Graphics), who is probably best known (at least to me) as the publisher of Johnny the Homicidal Maniac.

I was recently pinged by Matthew Ritter, writer of a new SLG book called NOVA PHASE, who asked if I could help boost the signal on his book which releases this week on Comixology. Perfect timing, since I’d been thinking about this very topic, so I decided to ask Matthew a few questions about how he got his book, which features a really off-beat and cool 8-bit art style, off the ground!

Nova Phase: A treasure hunt in space with old school video game graphics!
We have all had dreams. Dreams that we would have given anything to achieve and yet have eluded our grasp. It is about reaching for the stars and missing, it is about what one does with the failures that seem to make up most of life.
Veronica Darkwater is a down on her luck bounty hunter who finds herself plunged into an intergalactic treasure hunt for a legendary world of untold wealth. But she must compete with a crazy military commander who will stop at nothing to cement his name in history. Will she stay alive long enough to see if the legends of the mythical world of Una Tesara are true? A riveting adventure with retro 80’s/90’s arcade style art.

ME: One of the biggest questions writers face is, “How do I find an artist?” Can you talk about that a bit?

MATTHEW: How to find an artist, it’s a hard question. Easiest answer? Learn to draw. If you learn to draw, you can become your own artist. Just make sure you’re not looking for an artist because you’re lazy. You should at least know the basics of art and comicdom. It will at least help you know if you’re working with someone good or not. And I don’t just mean being able to think someone’s art is pretty. Sequential artwork requires a lot of skills that fine art doesn’t. Being able to draw hands well and consistently, staying on model, things like that. How to lay out a page properly. Also? If you can draw well enough to get your comic out there? People might just be able to see your amazing words and thus want to work with you in the future.

As for finding an artist who isn’t you? Look everywhere. Find out if any of your friends can draw. Go to conventions and walk down the artist ally. Look around the internet, there’s lots of art sites. Ask people, offer to show them your writing, work with them on their own projects. Maybe work with people who are pretty good but not amazing, hey, maybe you’re only pretty good too.

If you have the money? Pay them. This person has a skill that you don’t have. You probably want them to work on your ideas and make your words come to life. The first thing someone notices about a comic is the art. All of this suggests that they might just be worth getting paid. Which of course, you’re thinking ‘but i don’t have any money!’ Well, yeah. That’s hard. There are times when I’ve given up on eating to instead pay artists. Not smart, but I’ve done it.

There’s no one place to find artists, but there are lots of great artists out there, and some of them are looking for great writers. ME: So, for NOVA PHASE, did you initially put together a pitch package and send it out to various publishers before finding a home at SLG? Can you tell us a bit about what you included in your pitch package?

MATTHEW: Yes. I did. It isn’t always successful either. Also, it’s hard, because every publisher has slightly different things it’s looking for, and a lot of them don’t take unsolicited submissions.

I personally go with this set up:

10 pages of sequential art. Inked, lettered, but generally not colored. (unless color is integral to the comic. which it can be.Nova Phase was like that. Just black and white? It’d not give any idea of what the final is going to be) a mockup of a cover. A logo. A one page cover letter that explains who I am, and pitches the comic, explaining the plot.

It varies from project to project. I’ve done character and setting breakdowns. I’ve done long over detailed synopses that basically read like a novella. 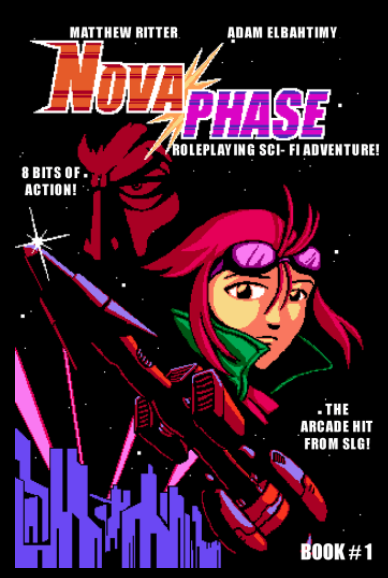 ME: Do you have any advice for someone looking to get a project published?

MATTHEW:  Yes. A few things. Number one. Is your project actually good? Find out. Make sure. If you make a project and it ends up sucking? That’s not anything to be embarrassed about. You have to practice to get better. You also need to find people who will be honest with you. Who will be mean about your project when you need it. You can’t get better if you are only bouncing ideas off yourself.

Number B, don’t be afraid to get rejected. Throw it out there. Show it off. The worst anyone is going to do is never ever want to work with you again. Which sounds harsh, but it’s unlikely. Most people will just be to busy to give it a real look, but someone might.

Number Tri, consider doing it yourself if no one else cares. Self publication is an option. Kickstarter is an option. Doing a webcomic is an option. The idea is to get your stuff out there for people to see it, and hate it or love it or ignore it. I assume, I hope it isn’t to get rich. Getting rich off comics should not be the goal.

That isn’t some high minded ‘oh this is about true art’ thing. It’s that there just isn’t a lot of money in comics. Comics don’t sell great, everyone is very interested in them because o all the properties coming out into games and movies, but people aren’t really buying them. The main Batman title, the best selling comic in the united states most months, doesn’t generally break 200,000 units in north America 200,000 seems like a lot, yes, but this sales figure is for North America. 528.7 million people lived there as of 2008. So, only .2 of that 528.7 buy the best selling comic.

528.5 people in north America, do not read batman. If only one out of a hundred people read batman? Over five million people would buy it.

So go, and do it. Make it. Show it. Believe in it. No one else is going to believe in your idea other then you. Also, make sure you keep a day job (for the aforementioned, you won’t get rich thing), day jobs help.